Cast iron brake discs are used as standard for most vehicles on our roads. In many applications, such as ship building, bridges or apartment blocks, corrosion of cast iron can be a major issue. In brake discs that are used regularly, the oxidised metal is simply removed by applying the brakes. But when a car is not driven regularly, we begin to see the impact of brake disc corrosion.

Corrosion of iron occurs when the metal is exposed to oxygen and water in the air. The iron is oxidised to produce a red-orange iron oxide known as rust. Iron oxide corrosion products do not have the same chemical properties as the cast iron that preceded it and can cause a variety of issues.

Under normal circumstances, brake disc corrosion doesn’t cause a problem. The corrosion products are poorly adhered to the iron underneath. This means that when you use the braking system again, a small amount of iron oxide will be removed from the surface by the brake pads. Problems begin to arise in very humid environments, or when a vehicle is not used frequently. Anecdotally, we’ve heard of brake pads rusting recently as cars have been driven less during the coronavirus pandemic as greater numbers of people worked from home and were not permitted to travel for the majority of the last year.

If the brake disc does not corrode uniformly, which is highly likely as it’s a naturally occurring process, corrosion will result in alterations to the geometry of the brake disc. This can lead to excessive noise and vibrations. In the automotive industry, this phenomenon is known as “cold judder” as it occurs even when the brakes are applied at low speeds when brakes are cool and therefore more effective. Cold judder is normally caused by disc thickness variation, a side effect of brake disc corrosion.

The density of iron (III) oxide, or rust, is much lower than the density of cast iron. This means that with significant corrosion, the volume of the metal component will increase. The corroded braking system will be noisier and will likely be less effective, with lower performance and increased stopping distances.

However, the problem with excessive corrosion goes even further. Because the corrosion has occurred with the parking brake engaged, the brake pads have been in contact with the disc the entire time. Corrosion products can build up around the pads, causing them to stick to the brake discs in position. This is known as corrosion adhesion, but in the industry, it is commonly called “brake stiction”. The chemical and mechanical interactions between brake pads and discs can influence the propensity to stiction. Factors such as pad porosity, acidity, hydrophilicity as well as disc surface topology and disc microstructure all affect the likelihood of corrosion adhesion or stiction. Less effective brakes mean increasing stopping distance and risk of skidding, making driving more dangerous and collisions more likely.

We can look to long-standing anticorrosive methods to prevent brake discs from corroding. Materials scientists could use a surface coating such as anticorrosive paint, galvanising or creating an alternative barrier to protect the underlying metal. These are used widely in a variety of highly corrosive environments and are very effective. However, in the case of brake discs, the high levels of abrasion and wear would mean that the coating or barrier on the surface of the metal would have a minimal lifespan. It could also lead to increased particulate matter pollution, a type of non-exhaust emissions that has recently come under increased scrutiny.

Another solution would be to look to alternative materials to fabricate the brake discs. Cast iron brake discs are widespread in the passenger vehicle market, but if we look to high performance vehicles, we see different materials being used. Formula 1 cars have composite brake discs reinforced with carbon fibre. They show excellent braking performance even under extreme conditions and are very light weight. However, carbon composite brake discs are very expensive to manufacture so it’s unlikely that we’ll see them introduced into the consumer automotive market.

A more cost-effective alternative material for brake discs is aluminium. Pure aluminium has low resistance to wear and abrasion, but this can be improved by formulating hard wearing alloys. Aluminium is light weight and relatively cheap. It’s easy to fabricate and can be used for a variety of components. It has the potential to replace cast iron brake discs from both a performance and a cost perspective. Reducing the weight of the vehicle will also incur savings in terms of running costs, and will reduce vehicle emissions.

Keronite has been working alongside leading brake manufacturer Alcon to produce experimental PEO coatings for brake discs. These coatings are designed to increase wear resistance and provide corrosion protection. Initial tests have shown promising results, and we’re excited about the possibility of using PEO coated aluminium in further testing. To find out more about the coatings on test and the experimental procedures used, download the full report. 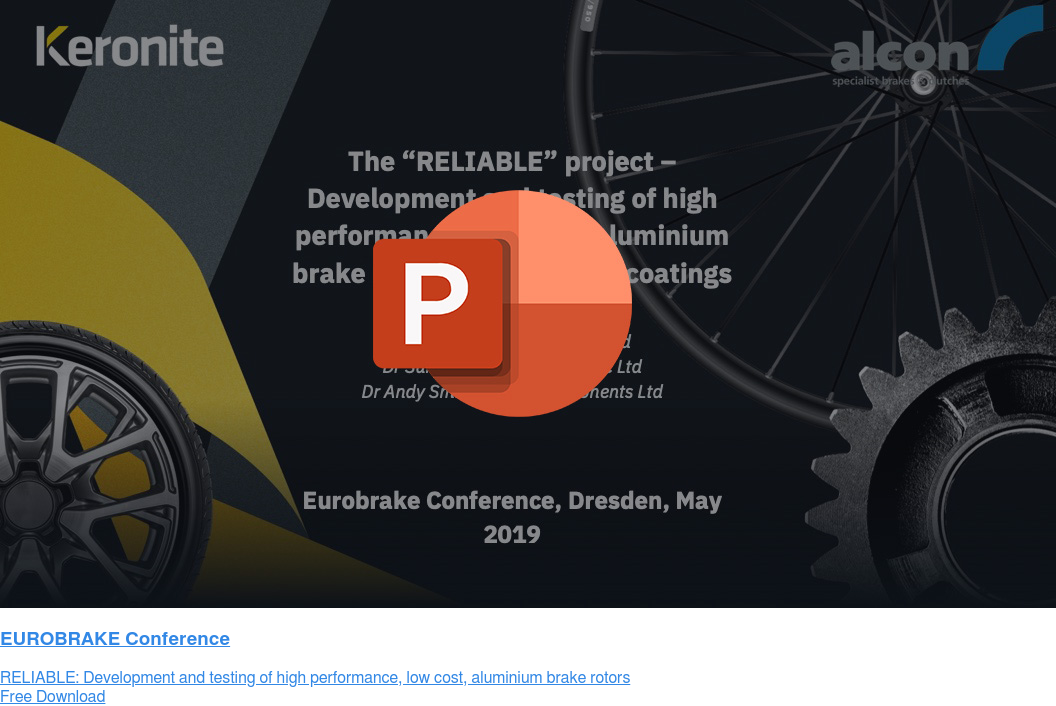