How materials scientists have made reusable spacecraft a reality

The aims of space exploration are changing. Spacecraft now need to go further into space and accomplish multiple missions. In other words, spacecraft need to be reusable to reduce the cost of space missions.

Reusable space vehicles can reduce the cost of access to space and reduce the environmental cost by recycling valuable resources and creating a circular space industry economy. This is necessary for space missions to occur regularly.

But it is happening, and material scientists have played an important role in the development of reusable space vehicle components by using surface coatings that enable lightweighting and prevent damage.

In this article, we explore the need for low-cost, reusable launch vehicles, and how surface treatments - like those developed by Keronite - are being used to build reusable components to drive down the cost of space missions.

Only a few decades ago, space tourism belonged in the realms of science fiction, but brands such as Virgin Galactic, SpaceX and Blue Origin New Shepard are already taking paying customers over the Kármán Line into space.

To be commercially viable over the long-term, space tourism will require fleets of efficient, low cost and reusable spacecraft that can transport large numbers of passengers. And these passengers are likely to have strong views about the sustainability of the spacecraft they choose. Non-reusable rockets are unlikely to attract many paying customers.

LEOs weigh in the tens to hundreds of kilos range, so large volumes of LEOs will require launch vehicles capable of carrying heavy payloads – or fleets of efficient and economic reusable spacecraft capable of multiple low-cost launches and recovery.

Most people know of NASA’s Space Shuttle, the original, mostly-reusable space launch, orbiter and re-entry vehicle. But the Space Shuttle was only partly reusable because the external main fuel tank was not recovered. The launch booster rockets and the orbiter, the iconic shuttle plane, were reused. Despite 135 successful missions, there were tragedies, and safety concerns eventually grounded the shuttle.

Since the end of the shuttle programme, its competitors have identified what makes a reusable spacecraft and the business models that make space travel commercially viable. This is developing launch, orbiting and re-entry vehicles and systems that can be economically, sustainably and safely reused and reconditioned multiple times. Reusing means the large, initial investment can be amortised over a longer operational life.

As a result of adopting reusable strategies, commercial space firms using reusable spacecraft have reduced commercial launch costs from the Space Shuttle’s $54,500 per kilo to $1,410 per kilo, for SpaceX’s Falcon Heavy. SpaceX, alongside companies such as Blue Origin, Virgin Galactic and Boeing, have developed effective reusable launch, orbiting and re-entry systems.

SpaceX’s Falcon launch vehicles use light metal alloys and light metals such as aluminium in crucial locations in the rocket design. This lightweighting strategy further reduces both costs and spacecraft survivability but can only be achieved with advanced materials science.

The use of light alloys in space technology

Space is an unforgiving environment. Exposure to atomic oxygen, high levels of UV radiation and extreme thermal cycling, from near-absolute zero to the thousands of degrees experienced during atmospheric re-entry. There is also a risk of damage to orbiters from micrometeorites, space debris and other spacecraft.

Spacecraft components are often designed using materials such as Kevlar or light metals such as aluminium, magnesium and titanium alloys. These have a high strength-to-weight ratio that facilitates lightweighting. Lighter components mean that less energy is needed to lift them into space, and therefore less resource and energy consumption. That makes spaceflight more sustainable.

However, lightweight materials such as light metals come with their own limitations in terms of how they perform in a harsh space environment. Light metals need protecting. Using surface coatings protects the integrity of the component or spacecraft structure through the launch process, the hostile environmental conditions while orbiting, and during re-entry.

In the Earth’s exosphere (up to 10,000 km altitude), satellites are exposed to significant amounts of radiation. Surface coatings reflect UV and thermal radiation. Thermal barrier coatings reduce the impact of high temperatures during launch and thermal cycling in orbit. Aluminium, for example, is a relatively soft metal that requires a coating to improve hardness and wear resistance.

Innovative protective surface coatings protect light metal components, enabling them to be used. Protective coatings support reuse and reconditioning as the coatings can be re-applied.

Plasma electrolytic oxidation (PEO) coatings can be tailored to provide a combination of surface properties. They are applied to metals using an electrolyte bath with a high voltage current passed through. Changes can be made to surface properties by altering the composition of the electrolyte solution. The application process is simple and uses no toxic chemicals, so is environmentally friendly. Crucially for the space industry, it can be completed at scale.

Ceramic PEO coatings provide a porous outer surface that has excellent adhesion properties if, for example, an additional polymer-based coating is required. PEO coatings provide the most effective, efficient and specialised method of protection for spacecraft components required to operate repeatedly, reliably, safely and sustainably during harsh launch, orbiting and re-entry conditions.

To find out more about Keronite’s PEO coatings, how they are applied and the surface properties they offer, download our datasheet on PEO in space. 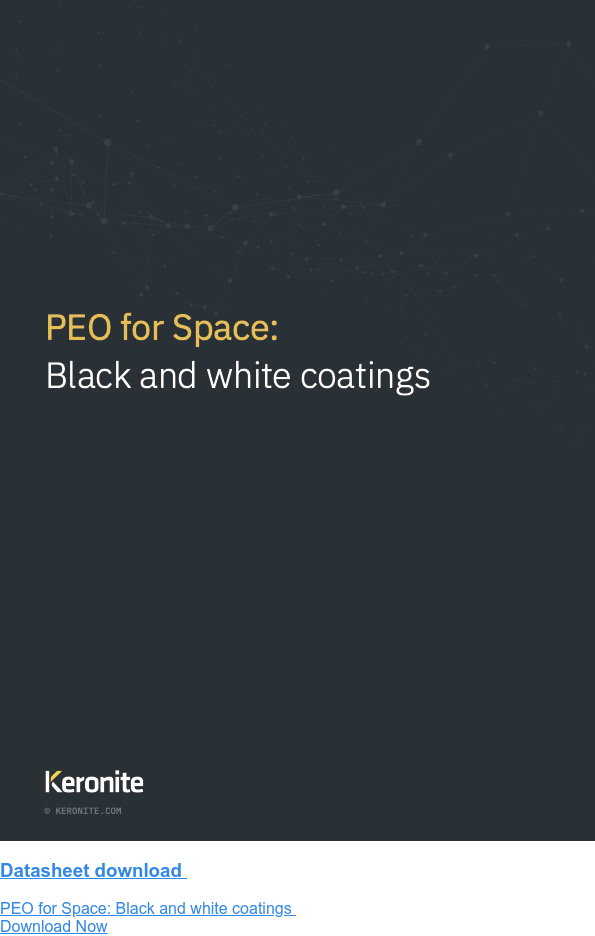