How does magnesium corrode?

Magnesium alloys can be found in an array of applications where weight is a specific concern. For example, in the automotive and aerospace industry, a lighter component will boost the fuel efficiency of the aircraft or vehicle.

It also offers more specific advantages: it has a high strength-to-weight ratio, which enables its use in structural applications, as well as being thermally and electrically conductive. These characteristics offer promise in other, more strenuous applications too. However, magnesium is more susceptible to corrosion than its heavier counterparts, which has historically limited its use.

Recent advances in both the understanding of corrosion mechanisms and associated material characteristics are yielding great insights for materials scientists. It enables new surface technologies to become widely available that increase the life of magnesium in corrosive environments.

Magnesium’s susceptibility to corrosion occurs despite the presence of an oxide layer. This film, which also develops in other light metals such as aluminium, fails to adequately protect components in acidic and neutral environments, where it can corrode rapidly exposing the metal underneath to further attack. So, unless it is alloyed with other elements to improve its corrosion resistance, or is protected with a surface coating, magnesium’s applications can be limited.

For the next generation of applications, boosting the performance of alloys with high magnesium contents is critical. Magnesium is commonly alloyed together with aluminium to provide additional corrosion resistance, but it remains susceptible to corrosion in carbon dioxide or sodium chloride containing environments.

What is corrosion and what are its causes?

Corrosion is an umbrella term that describes a number of reactions. Generally speaking, it occurs when metals unintentionally react with elements in their environment. The result of this reaction transforms them into substances such as oxides, hydroxides and sulphides. It is an electrochemical redox (reduction / oxidation) reaction during which the metal loses electrons. When it reacts with oxygen from the air, magnesium loses two electrons to oxygen, in the following example this forms magnesium oxide:

The loss of electrons is significant. As highlighted above, corrosion is caused by the redox reaction when metals lose electrons to other elements. However, some metals do not corrode except under exceptional circumstances. This is because they are chemically very stable, such as gold and silver, which are two of the few metals that occur naturally in their metallic state. This is because it is thermodynamically unfavourable for metals such as gold to lose the electrons that cause them to oxidise.

Magnesium is a group II element, so has two electrons in its valence shell. This is the outermost shell of the atom. It is the number of electrons in this valence shell, called valence electrons, which determine how reactive the element is. And this reactivity then determines how easily the element will bond chemically with different atoms.

Magnesium has low ionisation energy, which is the energy required for the two electrons to leave its valence shell. This means the energy required for it to lose those electrons is available in typical ambient conditions – it forms an oxide, or hydroxide or sulphide, which initiates the corrosion process. Gold has a significantly higher ionisation energy, so it does not lose its electrons in air and does not corrode.

What types of corrosion affects magnesium and its alloys?

There are many different types of corrosion, all of which are caused by the same underlying electrochemical processes, but which may have different initiators and be manifested by different forms.

The form of corrosion a metal suffers depends on many factors that include:

Magnesium and its alloys can corrode through any of these modes, including uniform corrosion, galvanic corrosion, pitting and stress corrosion. It is far rarer to see magnesium suffer from EFC and crevice corrosion.

The metal is particularly susceptible to galvanic corrosion, where a conductive solution joins two metals, corroding one and protecting the other. From an engineering design perspective, galvanic corrosion is significant because magnesium alloy components are typically fastened to another metal.

Galvanic corrosion processes – where and why these occur

Magnesium and magnesium alloy components and parts are found in multiple sectors. For example, because it has a lower stiffness than steel, magnesium alloy is an effective vibration dampener so often used as an engine block cradle, attached to the chassis and engine block in a range of vehicles. The cradle will be connected via a bolted joint, rather than welded. Using this type of fastener enables the engine block to be easily removed for repair.

As a result, the magnesium alloy cradle is potentially in contact with a steel chassis via a steel fastener and possibly a magnesium engine block, but most likely cast iron or aluminium. Unless measures are taken to prevent it, galvanic corrosion will occur.

The metals have different electrode potentials. Essentially, one loses its valence electrons easier than the other. In the case of magnesium alloy in contact with a steel fastener via a conductive solution such as salt spray from driving in the rain, the magnesium alloy will lose its electrons and form oxides and hydroxides.

This removes material, the magnesium alloy, from the cradle. The exact form of corrosion depends on the underlying factors outlined above, but almost certainly pitting will occur. This will lead to cracks and eventual failure.

The solution is typically to separate the different metals using a space or surface coating. If a surface coating is used, that can provide additional protection against corrosion.

To learn how surface coatings such as PEO enable engineers to exploit the full range of magnesium’s properties by preventing corrosion, click below to
download the whitepaper. 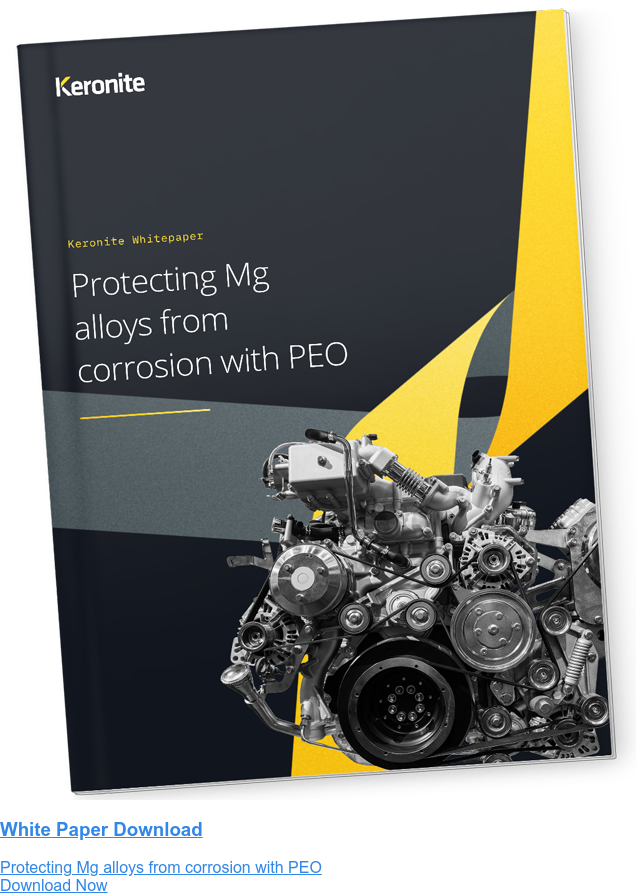