The automotive industry has had an intermittent relationship with magnesium alloys. They have been used in the automotive industry since the 1920s, reducing the weight of racing cars, enabling faster acceleration and higher speeds – all in an effort to win races. But it’s usage spread beyond professional auto racing since then. In the 1950s, Volkswagen designed the iconic Beetle, featuring a magnesium gearbox and engine blocks.

An entire century later, magnesium’s new role is not in speeding up lap times. Instead, it is being used to lightweight vehicles, improve their fuel efficiency and reduce emissions to meet new regulatory requirements. A magnesium alloy part can be as much as 50% lighter than steel, and between 15-30% lighter than aluminium. Plus, it is fully recyclable.

Yet despite its advantages over steel and even aluminium as a lightweight high strength-to-weight ratio alternative, magnesium’s full potential is yet to be fully exploited. Commonly cited concerns over its lower ductility and creep resistance, rigidity and softness are well placed. Magnesium wears rapidly and is easily corroded.

Due to these concerns, magnesium has found a unique role in automotive applications. Its low stiffness properties allow its use in dampening systems for vibrations and in noise reduction systems. However, the corrosion resistance - and at the same time wear resistance - can be transformed using surface coatings, enabling automotive engineers to benefit from all the properties of magnesium alloys in much broader automotive applications.

What are the most common magnesium applications in the automotive industry?

Modern engine blocks can be cast magnesium, as in this application does not generate high loads, and the metal’s high heat conductivity ensures it effectively sinks heat. Magnesium gearboxes, clutch housings and crank cases are also used frequently. But to protect the magnesium engine block from high temperature corrosive coolant fluids, aluminium coatings are used where fluids circulate.

Structural elements such as steering wheel and column, roof frames and engine cradles use magnesium to benefit from its mechanical properties. With lower stiffness than steel and aluminium, a magnesium alloy engine cradle is more effective at dampening vibration and the resulting noise.

Using lighter magnesium for structural components and items such as car seats at the front of the vehicle moves the centre of gravity rearwards, which improves handling and overall safety. And new alloying technologies are overcoming the formability challenges of traditional magnesium alloys, increasing the likelihood of using magnesium to replace aluminium body panels in high-end and specialist vehicles.

What are manufacturers doing to combat corrosion?

Magnesium and its alloys suffer from all main forms of corrosion, including uniform corrosion, galvanic corrosion, pitting and stress corrosion. The metal is particularly susceptible to galvanic corrosion, where a conductive solution joins two metals, corroding one and protecting the other. Immersion in conductive solutions is a common hazard for automotive components. Salt spray on a winter’s day coats vehicles with a conducting liquid, as can a summer drive to the coast, with a coating of seawater spray.

Light metals such as aluminium form a ceramic-like protective film of metal oxide that resist the inward flow of oxidants causing low level corrosion. Magnesium does the same, but its film is less effective, particularly in acidic and neutral environments, where it can corrode rapidly. In contrast, magnesium is usually stable in basic (alkaline) environments.

As a result, an engine block’s cooling system is a highly corrosive environment for the metal – hot contaminated coolant fluids. Attempts by automotive manufacturers to use various organic compounds as additives in cooling fluids to reduce magnesium alloy corrosion have met with some, albeit limited, success. Corrosion still occurs, but it is inhibited by the coolant. Researchers at Keronite are working in close partnership with automotive manufacturers to apply new, advanced surface coatings in such situations.

Magnesium alloys have greater corrosion resistance than pure magnesium, particularly when aluminium is used. The aluminium component forms a surface coating that provides some additional protection, but that is breached for example in the presence of sodium chloride, or carbon dioxide.

How surface coatings can widen automotive applications for magnesium

The natural oxide coatings formed by light metals and their alloys are rarely sufficient to prevent damaging and eventually catastrophic corrosion in many automotive applications. This means either workarounds such as aluminium layers (see above) or simply not using magnesium at all are the result.

But this does not have to be the case. Surface coatings, such as Plasma electrolytic oxidation (PEO), offer multiple solutions for automotive engineers designing and specifying automotive components and sub-assemblies. PEO’s unique technology uses an electrolyte bath and plasma over three distinct stages to form a ceramic-like duplex coating on magnesium alloys.

Each stage enables engineers to adjust the process to create tailored coatings for the precise needs of the automotive component’s application. The multi-layered coating’s top layer is also highly porous, which can incorporate the contents of the electrolytic bath in the surface coating to include additional properties.

PEO’s fine microstructure and surface texture create an ideal physical ‘key’ for top coats – resulting in much stronger adhesion of the top coat than other surface coating technologies, such as hard anodising. This duplex system combines the improved corrosion protection of both elements synergistically to provide unparalleled corrosion protection. This enables automotive engineers to use magnesium alloys in applications that were previously not an option.

To learn how surface coatings such as PEO enable automotive engineers to exploit the full range of magnesium’s properties in wider applications by preventing corrosion, click below to download the whitepaper. 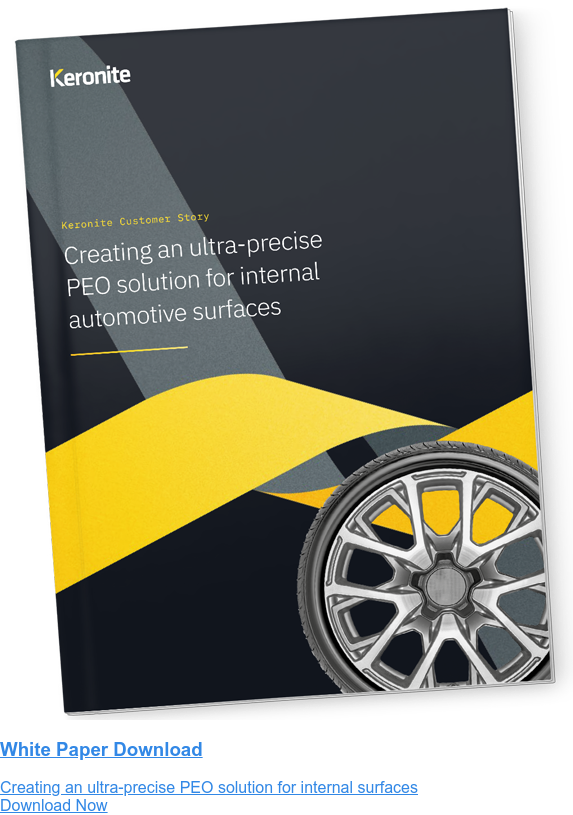